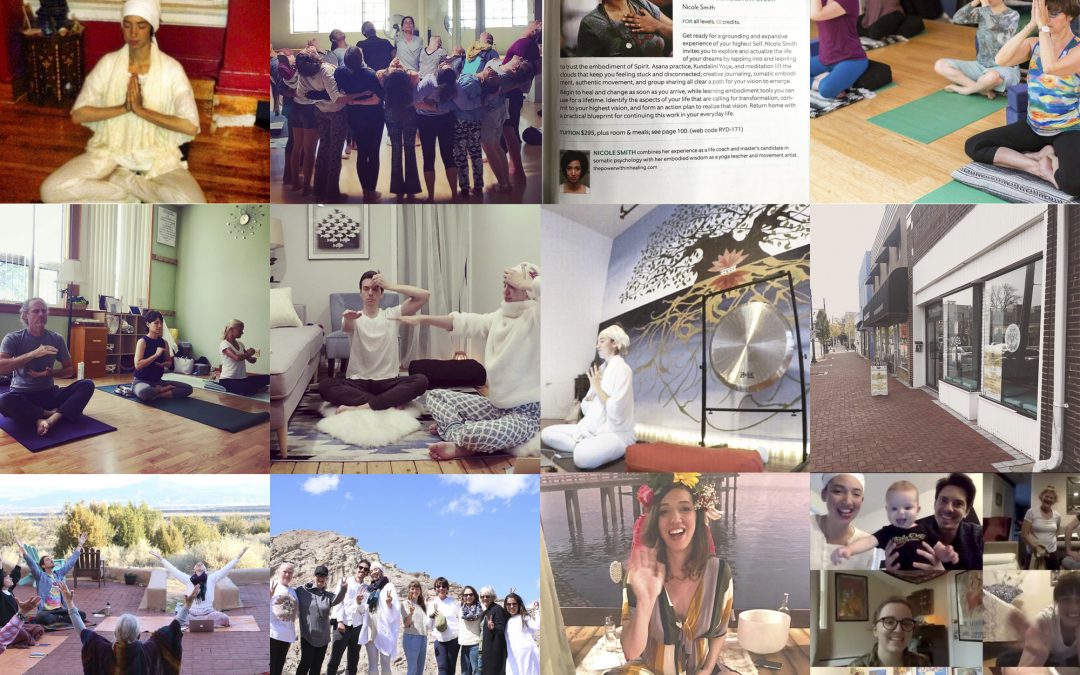 After a decade of studying yoga while being a professional dancer, Nicole embarks on her first 200HR RYT Kundalini yoga teacher training at GoldenBridge Yoga in NYC. The messages “You’re here to help people” and “Power Within Healing” would often be heard in meditative states.

The normalized aches and pains of a dance career begin to scream more loudly. Nicole experiences multiple disc herniations with weeks of immobility and dance work affected. Her general anxiety/depression becomes more pronounced as things don’t seem promising long term, and the fear of her dance career ending at what seems like its peak looms large. She dives more deeply in self-development work to keep her spirits high.

At the start of the year, Nicole attends a life coaching certification program between dance tours and starts to dream up Power Within Healing’s first offerings. She begins “Vision Based Living” programs which include yoga and coaching in person and virtually. A contact connects her to Kripalu in the Berkshires, and she begins teaching on teams there once a year.

After much inner work, Nicole transitions to focusing only on Power Within Healing, and takes a break or “retirement” from her dance career. She finds “somatic therapy” in Manhattan and starts attending regular sessions herself, finding it bridges the gap between her dance life and mental health work. She discovers Somatic Psychology Masters degree programs in the San Francisco Bay Area, and considers applying and moving to the West Coast.

She is accepted at multiple schools, and while visiting their programs, her boyfriend Billy proposes. In the spring they decide to take the leap on all the fronts- moving cross country, starting grad school, and marriage! She begins to attend CIIS Somatic Psychology Masters program with an open mind and heart, while teaching yoga and holding private client sessions at local studios near their apartment on the island of Alameda.

Loving, learning, and growing going well, she shares openly she’s always wanted to have her own yoga and wellness space hoping to call it in. Nicole & Bill decide to jump on it and together, and open a yoga and wellness studio on the ground floor of a live/work space. All the while, she was honored to be a guest teacher trainer at Yoga to the People’s YTT for multiple trainings, and she also hosts her first solo yoga and self-development retreat at Kripalu at the end of the year.

Portal 18 Oakland opens for business. Nicole is streamlining her master’s program studies in somatics on trauma informed care once she realizes that her anxiety/depression and physical pain are all connected to childhood trauma. It was a big AHA! moment. Private client sessions are growing and increasing in impact, and she begins years of personal mentorship and supervision for her individual and group work with a likeminded somatic psychotherapist and yoga teaching professional who was several years ahead in the journey.

Nicole graduates from CIIS with her MA in Somatic Psychological Studies, and soon after begins studying and certifying in breathwork with David Elliott. Outgrowing the Oakland studio space for many reasons, Nicole & Bill come back to NJ in the Spring and she hits the ground running returning to studios in NYC & NJ and reconnecting with old friends. Power Within Healing Space in Belmar NJ is conceived, and launches with many popular series on trauma sensitive care, Kundalini Yoga for beginners, and chakra psychology theory. Power Within Healing Online virtual studio membership is birthed so that the West Coast students can stay connected.

In January, Nicole finds out she’s pregnant AND that she will be unable to continue subletting at the Belmar space due to a change of ownership — all within the same two weeks!!! After lots of emotions, she decides to not relocate to another local NJ space, and instead focus on Power Within Healing Online and hosting trainings and series with partner studios where she is able. The “Connect With Source Energy” retreat in New Mexico was a huge success with students from both coasts, and she plans to host two retreats in 2020. One in California, and one overseas. In the Fall, she goes on maternity leave and births her son Frederick Jasper Levay (Freddie). The vortex of the new mama postpartum period begins…

In January, she begins collaborating with one of her long time studios Elevate Yoga that had recently changed ownership to her dear friend Alicia Somma Hodgskin. March 2020, Covid arrives. Like most other working mamas, she loses help with childcare and enters a period of survival mode, still wanting to be of service and offering occasional opportunities for online classes via Zoom while her husband and baby son hid in a bedroom. In May 2020, she invests her personal savings in a team for marketing planning to help her pivot and shift everything online. She develops three streams to connect with the Power Within Healing from home: Private Virtual Sessions, Power Within Healing Online Virtual Studio, and Awakening Bodies Mentorship for Healers.

A year of collective trauma finally coming to a sense of completion, “A Course In Self Healing” will launch in January and February. And much much more on the horizon…